ONE OF THE MOST POPULAR PARTS OF BUDAPEST.

Based on unbiased reviews from our guests

The 4-star Golden Park Hotel is located in the imposing 100-year-old building on Baross Square, next to Budapest's most important transport hub, Keleti Railway Station. The city centre with the Danube, the Parliament and Váci Street is only a few minutes away by public transport without any transfer. The hotel is centrally located in Budapest, with almost all of Budapest's attractions easily accessible by metro, bus or trolleybus, but Budapest's most beautiful and richest park, Városliget, is also just a 10-minute walk away, as is one of Europe's largest shopping centres, the Arena Plaza.

Golden Park Hotel Lobby Bar: If after a long walk you're in the mood for a light sit-down or it's too early for bed, our Lobby Bar offers alcoholic and non-alcoholic drinks and armchairs with armchairs from 9:00 am until 11:00 pm.

Hotel Golden Park Budapest EXPLANATION: By car: the Golden Park Hotel is easily accessible from the motorways. From Vienna on the M1 motorway (226 km), from Lake Balaton on the M7 motorway (100 km). Cross the Danube via the Elisabeth Bridge to the centre of the city, take the Rákóczi road to Baross Square. From the M3, take Hungária körút and turn right on Thököly út to Baross tér. From the railway stations: from Keleti Railway Station, the hotel is only a half-minute walk through the square. From Déli-pályaudvar, take metro line 2, red, to Keleti station. From Nyugati Railway Station, take metro line 3, blue, to Deák tér, then metro line 2, red, to Keleti pályaudvar stop (or tram 4; tram 6 from Nyugati Railway Station to Blaha Lujza tér, then take buses 7, 7A, 173 or 78 to Bosnyák tér). By public transport: Baross tér can be reached by bus No 7, 7E, 7A, 20E, 30, 33, 173, 173E, 73, 78, metro No 2, red metro No 24, tram No 24 and trolleybus No 76, 78, 79, 80.

Given the current situation, We recommend using contactless payment. We have expanded the number of acceptable cards. Nevertheless, the cash payment option remained.

Private parking is available on site. However, it is also possible to park on the street, in addition to paying district parking fees.

The hotel has a restaurant, bar and garden area for a pleasant, relaxing stay.

Hotel near the popular sights of Budapest, in the city center. 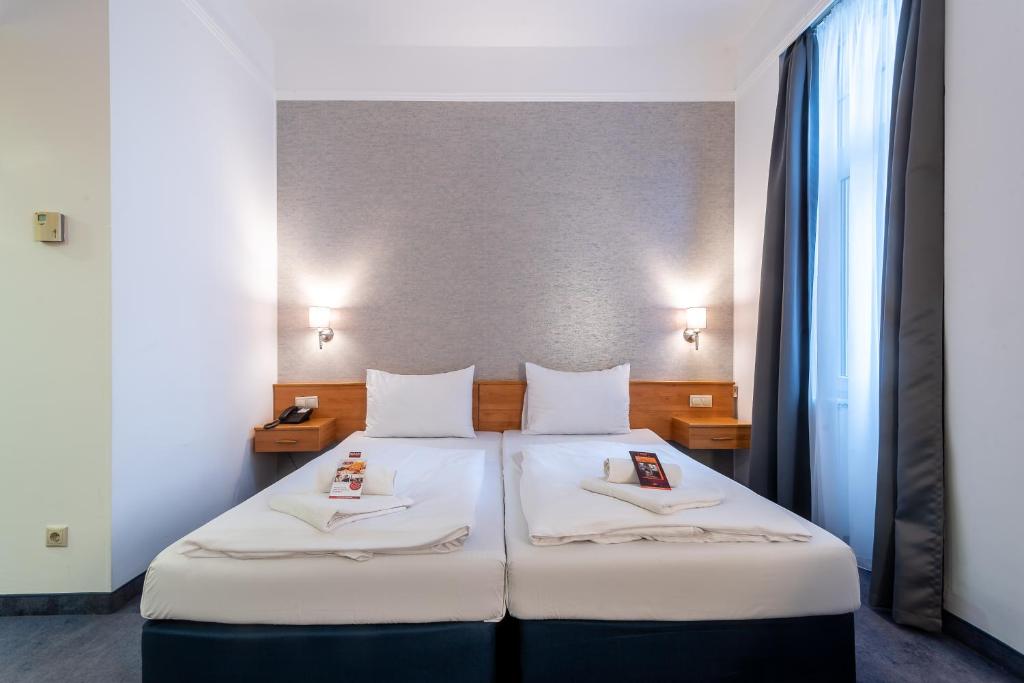 Practically furnished, bright rooms with a comfortable double bed for a relaxing stay. It has a work desk, a safe and satellite TV. Rooms have been recently refurbished and have a private bathroom.

Sunny rooms with two comfortable beds. Due to its calm environment, it is ideal for a business or study visit, for those who want to relax. This room has a work desk, safe and satellite TV. Rooms have been recently refurbished and have a private bathroom.

Sunny rooms with three comfortable beds. Due to its calm environment, it is ideal for a business or study visit, for those who want to relax. This room has a work desk, safe and satellite TV. Rooms have been recently refurbished and have a private bathroom.